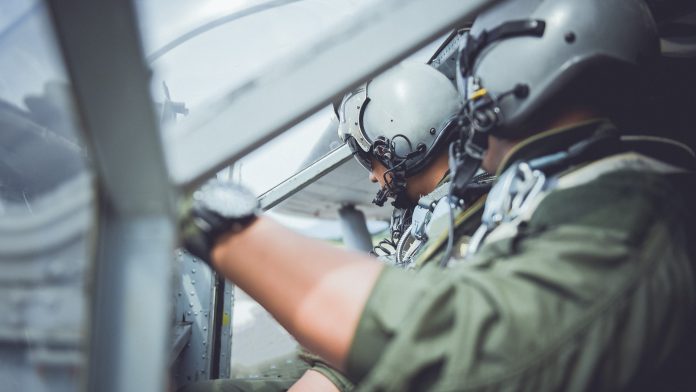 Learning how to a fly a jet is extremely demanding. Not only does a high degree of skill need to be matched with an enormous amount of information processing from the aircraft’s dashboard, these have to be managed under high physical stresses. Becoming a jet pilot takes hundreds of hours of training to achieve proficiency. This comes at a very high cost, and the rate at which pilots learn varies greatly. For years, the aviation industry has been challenged with the question of how to measure training effectiveness.

In a ground-breaking study, a new method was devised to reveal what happens inside the minds of jet pilots when they take to the air. In a collaborative research project, the Faubert Applied Research Centre, the University of Iowa’s Operator Performance Lab, the University of Montreal, and Rockwell Collins, partnered their fields of expertise to come up with an innovative way to assess the mental loads of flying. The paper was presented at I/ITSEC 2017 and awarded ‘Best Paper’ for training. The paper has been described by military leaders as the ‘first objective measure of operational readiness.’  The study represents the initial stage of a multi-year research project, with expert pilots currently being tested for the next phase.

Below are the details and findings:

In an experimental combination of man-machine technology, an Aero Vodochody L-29 jet plane had a NeuroTracker system integrated into the dashboard and jet pilots were hooked up with eye tracking and ECG equipment.

This setup was also mirrored in a flight training simulator. The goal was to objectively measure cognitive and physiological loads across three levels of flight maneuvers, assess effects on performance, and compare these for both live and simulated flight.

Pilots in the study first completed a 15-session NeuroTracker program to establish an elevated cognitive baseline. They then carried out a first round of live and simulated test flights involving low, medium and high difficulty flight maneuvers, such as performing steep climbs with rolls within a specific time duration.

Eye tracking and brain signals were measured, along with an analysis of technical performance. On a second round, they repeated the same test procedure, but with an added twist – jet pilots were also tasked with performing NeuroTracker while executing maneuvers.  The researchers’ theory was that NeuroTracker would measure the pilot’s spare cognitive capacity.  In turn, this would reveal the mental loads involved with each task – something never before attempted.

The demands on the brain were found to be surprisingly large for all tests. The pilots’ ability to perform NeuroTracker was drastically reduced, using up almost all of their spare cognitive capacity.  This effect consistently increased the more difficult the flight maneuver was. The simulator had less effect on mental and physiological loads than live flight, a finding of particular interest for identifying limitations for virtual training.

How It Can Be Applied

By measuring pilot workload for various scenarios and in parallel with performance metrics, this approach could be used to assess a jet pilot’s training capability and to personalize training loads to his or her specific needs.