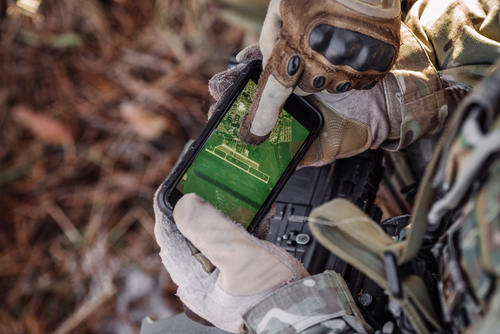 GPS has been a mainstay for the United States military since the 90s and has helped power mission critical efforts including force deployment, force navigation, logistical support and vehicle navigation. It’s clear that the advantages of having the GPS satellite constellation delivering positioning, navigation and timing (PNT) are enormous and the technology has provided the United States military with a substantial tactical edge.

But that tactical edge could be eroding.

The space domain has become increasingly congested and contested. Simultaneously, our adversaries have grown both increasingly sophisticated and increasingly aware of our reliance on space capabilities – including GPS and SATCOM.

These threats make our military’s reliance on GPS for PNT a concern – troop deployment, movement, and navigation now rely on a system that can be compromised by our adversaries. And it’s that concern that has the military exploring alternatives to GPS for their PNT requirements.

However, according to a new Thought Piece by Booz Allen Hamilton entitled, “Resilient Positioning, Navigation and Timing (PNT) Requires New Thinking about Systems Integration,” this is where the big challenge begins.

While the problem of identifying a PNT alternative may seem like the hard work, it’s really just the beginning. That’s because integrating new GPS alternatives into existing military platforms is easier said than done.

The results of this process are military platforms that are very complex. They’re comprised of multiple disparate systems that all rely on GPS data from the GPS signal receiver, and are all integrated together. This makes it difficult – arguably impossible – to simply swap out a GPS signal receiver for one that utilizes an alternative to GPS – too many of the other, integrated systems in the platform are relying on the data from that signal receiver.

Ultimately, it boils down to how the military does business. This is a natural outcome of acquiring platforms from OEMs that integrate multiple military systems into a closed and proprietary whole. But it’s not the only negative impact of this existing acquisition system.

Not only does the existing OEM-based acquisition system make upgrades difficult, it’s also not efficient. These proprietary systems need to be serviced by the OEMs, who have the most knowledge about them. These OEMs can also name their own prices, since there are no alternatives and no competition. This increases costs for the military and, ultimately, the taxpayer.

The alternative is to have the military take ownership of integration, as well as the development of the systems, and to begin relying on open systems that can be more easily swapped out and upgraded. However, this means that the military needs to increase the knowledge and capabilities of the individuals within the program offices, and needs to increase information sharing and collaboration between the offices themselves.

The process to find an alternative to GPS for PNT is indicative of a larger problem that’s facing the military. By relying on OEMs to build “system-of-systems” platforms, the military is losing the flexibility and organizational agility that is required in today’s fast-paced defense environment. And by taking ownership of platform development and integration, the military can increase its efficiency, agility, and flexibility, while ensuring that it is always equipping warfighters with the best and latest tools and technologies.

To read the Thought Piece in its entirety, download a complimentary copy of “Resilient Positioning, Navigation and Timing (PNT) Requires New Thinking about Systems Integration”.