As regular readers of The Modern Battlespace know well, making all our military radios interoperable with each other is a critical communications issue that needs to be addressed. Software defined radios (SDRs) may make interoperability more of a reality in the long term while also incorporating other advances in embedded cryptology, processing power, and artificial intelligence.

In the meantime, however, that lack of interoperability is causing real, on-the-ground challenges for troops in the field, and it goes to show the urgency with which the Department of Defense needs to develop and field the next generation of SDRs.

Shortly before he retired in 2017, Lt. Gen. Ben Hodges, then-commander of United States Army Europe, lamented the lack of secure, interoperable field radios among U.S. troops and their NATO allies at an Association of the U.S. Army event. “They cannot even talk to each other securely,” he commented.

This has obvious implications for operational effectiveness. Because the U.S. is regularly deploying troops in concert with so many allied nations in as tight-knit an alliance as NATO, the European theater is exceptionally susceptible to this hole in our communications networks. Not to mention that so many of our NATO allies have also deployed their troops alongside ours across the globe from Ethiopia to Afghanistan.

When they’re deployed in the field, the joint forces of NATO countries, be it our British, French, or Polish or Romanian allies, need to be able to coordinate down to the tactical level: squad leaders need to coordinate movement, direct support from allied aircraft, and any number of the vital, nut-and-bolt functions of warmaking that allied warfighters in an increasingly tense AoR just have to be able to talk about.

According to a recent Military.com article though, the Air Force Research Lab is making progress developing SDRs that could ameliorate this problem. According to Michael Gudaitis, a principal engineer at the Air Force Research Lab, SDRs under development will use agile software to “eventually enable all warfighters and machines to communicate with each other,” compared to the current state of radios, where U.S. and allied troops “may all use the same frequency,” but even then, “they still can’t talk to each other.”

Thomas Schamberger, Manager for Airborne Communications at Collins Aerospace expanded on these advantages in a recent article, “A key advantage is the ability to host multi-functional capability such as waveforms, embedded cryptology, and greater internal processing power that yields real-time communication around the battlefield” he said.  “Marry this up with advanced Navigation and Precision Timing and GPS advances, and the warfighter now has the most accurate communication method available today. The ability to immediately adapt to changing battlespace needs is also a by-product of SDR radios,” Schamberger continued.

A radio that’s governed by software though, is far more malleable. Software, Gudaitis notes, is “literally like an app.” Install the right one and just like that, you have a radio that you can use to talk to whomever you need to talk to.

That’s not to say though, that there aren’t problems. The cost of any new military radio, built to be battlefield rugged, is going to cost “two to three times more” than its commercial counterpart, and of course, ensuring cybersecurity, while also being flexible enough to permit radio calls from any of the 29 NATO member countries, is going to be a sizable challenge to developers.

With the difficulties involved in building the next generation of SDRs, Gudaitis estimated that SDR could achieve formal program initiation as a program of record in three years’ time.

With our troops’ critical need for tactical communications with other NATO troops though, it’s safe to say that progress can’t come fast enough.

Justin Lee is a Writer for The Modern Battlespace and contributes news and events content to this site. He writes for a number of industry digital communities that focus on communications technology, including commercial satellites, cloud networking, and the latest in aerospace. Justin also shares his perspective from his past experience in the executive and legislative branches of government and the policy think tank world.

Experts in the Field: Elaine Bitonti Keeps the...

The Evolution of Today’s Battlespace: Q&A with Troy...

The Road Ahead for Battlefield AI

Modern Air Communication Tech is What Enables Our... 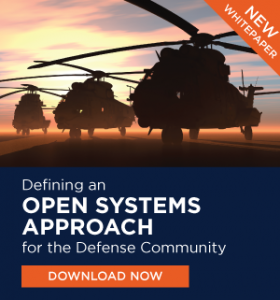