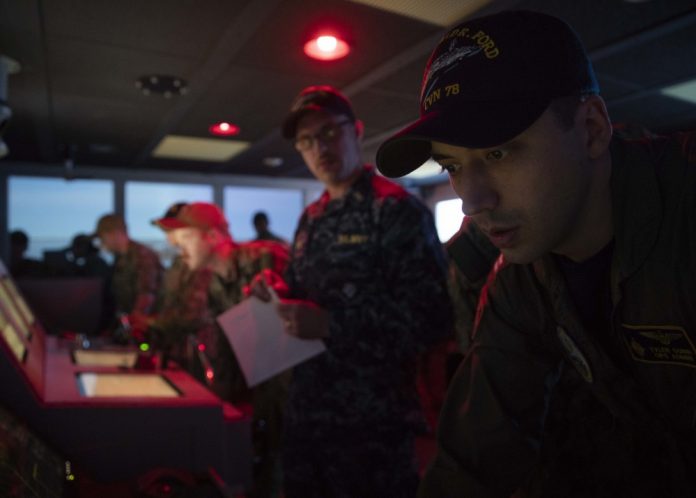 Maritime warfare today is a multi-dimensional arena where the electronic and cyber domains are arguably just as important as the direction of the bullets flying back and forth across the battlefield. While connecting so many elements of the warfighting enterprise has definite advantages that make servicemembers safer and more prepared, it also means that the base level of competency that a servicemember needs to fill nearly any role in the armed forces has become much higher.  In today’s environment, servicemembers must be able to master the tremendously sophisticated electronic systems that backstop so much of a modern warship, including everything from its engines to its combat systems.

On Modern Military Training, we’ve previously discussed how land forces need to reboot and train personnel on new innovations in simulation and virtual reality (VR) to stay at the cutting edge of the burgeoning field of multi-domain warfare. What we need to emphasize though, is that what is true of land forces is also true of our maritime forces.

Frank Giovanni, the Navy’s Deputy Director Expeditionary Warfare, emphasized the difficulties that this complexity brings with it at the Sea-Air-Space conference. “As…you look to the Ford-class carrier, you look at the [Littoral Combat Ship], what you’re seeing is a…knowledge workforce” that’s required to run the ship. “So, the apprentice seaman…on these new, modern warships, is not really able to operate them and monitor them to the level that an experienced person would,” having gotten the experience and training necessary to deal with the complexity of modern naval systems.

We need to think about how we build this knowledge workforce in the future, he continued.

Fortunately, in the past few years, there have been tremendous developments in military training technologies that could not only expedite how quickly those apprentice seamen get the right training on complex systems, but perhaps even make that training accessible at whatever point of need may arise across our vastly distributed maritime warfare operations.

Cloud technology, for example, and its “practically limitless resources” could make it possible for warfighters to access new regimens of training or augment the effectiveness of existing training anywhere around the world. This means that sailors have what they need to get trained up on whatever technology is necessary when they are assigned to next-generation warships without having to be first moved to a static facility that houses the particular training software that they need.

Summarizing her whitepaper on the subject, which was recognized as the Best Paper at I/ITSEC 2018, Jeanette Ling, Principal Software Engineer in the Visual Systems group of Collins Aerospace, noted that using cloud technology to deliver training could “reduce overall cost[s]” associated with moving personnel around to receive training. What’s more, perhaps even beyond the effectiveness and cost benefits, “there is also some thought that soldiers will train more given this type of environment,” since they can train at their own convenience thanks to the available anytime, anywhere accessibility that the cloud can afford.

It should be clear by now that maritime warfare is an increasingly information-driven enterprise that requires a new type of technical competency in our seafaring personnel. Given that the technology needed to operate will only become more complex, correspondingly innovative training solutions, like cloud-based learning platforms, merit consideration.