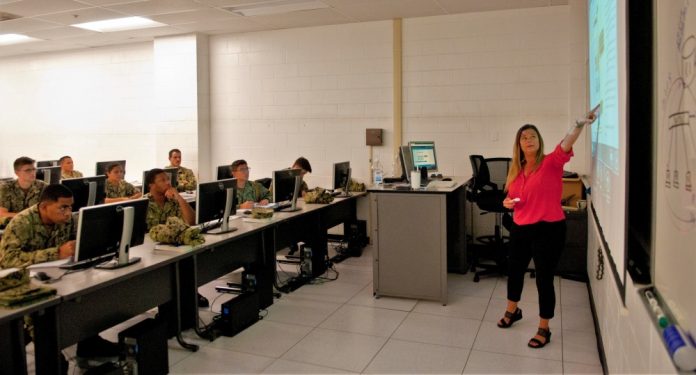 As the Navy moves away from an Industrial Age learning model through its Sailor 2025 initiative, widespread change is readily apparent as its Ready Relevant Learning (RRL) model becomes the watchword of training reform throughout the sea service.

In an effort to keep up with the nearly 45 separate reforms that are rolled up under Sailor 2025, the Modern Military Training editorial team presents a primer on the latest breaking developments that we’ve seen as a product of the initiative.

Part and parcel to the RRL theory of a modernized training system is that this class of soon-to-be ITs are coming back to IWTC Corry Station after their first 18-24 months at an operational command, and, armed with the real-world experience that their time on duty provided, have a better understanding of how their classroom learning applies to their duties.

Thus, these sailors earn their 745A Navy Enlisted Classification code not only armed with the academic and technical knowledge to discharge their duties, but also with a year and a half to two years of experience already under their belts.

Navy Masters-at-Arms have had to face a new breed of threats in the past few years with active shooter incidents like those at the Navy Yard and the two at NAS Oceana.

To better respond to these security needs, which have only grown as the threat of terrorism also lingers, the Center for Security Forces has announced that it is revising and modernizing the Navy’s Master-at-Arms “A” school, which sailors pursuing their master-at-arms rating will attend after basic training.

The school’s pilot curriculum will align it with the RRL model and will de-emphasize front loading learning material at the beginning of a sailor’s career. Rather, material will be spread over the course of his or her career and according to whether they come to need those skills as they take on new or additional duties.

For example, the basic principles of law enforcement are being moved to a separate class “C” school or journeyman level course so that sailors can focus on some of the biggest security issues facing the sea service today, including having enough personnel available with advanced training as a tactical team that can respond to active shooter and terrorist threats.

Last month, more than 200 senior enlisted sailors convened for a conference on RRL. As experienced practitioners in the ratings where the Navy hopes to use RRL, and the ones who would command sailors who are continuously using RRL resources in training, it is important that senior enlisted personnel not only approve of the direction of the program but have a substantive hand in shaping the program.

After being introduced to technologies that make RRL possible, such as 3D glasses, virtual classrooms, and virtual reality applications, the attendees discussed how they should proceed with RRL implementation and how to bring more junior sailors, who have more of a direct stake in the program’s outcome, into the planning process, too.

“I thought it was amazing,” said Master Chief Information Systems Technician Margaret Cunningham, the N6 directorate leading chief petty officer at Expeditionary Strike Group Two. It was then their job to take those ideas back to their commands, solicit ideas, “take those ideas and knowing what actually needs to be covered in the training and merge the two together and come up with a great product.”