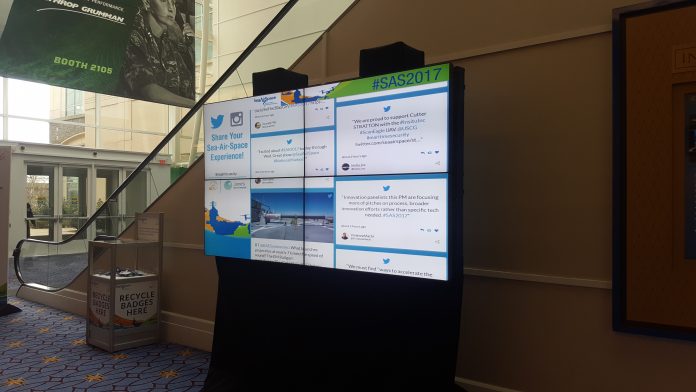 With the myriad of challenges that the Air Force must address in training its next generation of pilots, the Air Force will need to increasingly rely on simulated training environments.  The simulators will run the gamut from relatively inexpensive VR headsets that can help teach what the commander of the U.S. Air Force’s Air Education and Training Command (AETC), Lieutenant General Stephen Kwast, called the basic “caveman skills” of flight, all the way up to high-fidelity platforms in which pilots can learn the most sophisticated of fast jet skills, like engaging targets in combat.

It should be no surprise then, that the U.S. Air Force plans on expanding its inventory of simulators well into the future.

But Col. Carpenter made it clear it’s not enough to simply buy more stock of devices of similar capability to what the Air Force already has. What the Air Force needs is more capable simulators that prepare pilots for the demands of today’s modern, connected battlespace.

The complexity of 5th generation fighter jets, cross domain solutions, multi-level security, and common threat environments were just a few that Col. Carpenter cited for his industry partners. Concurrency is yet another challenge that the field has to contend with. The effort of training a pilot on a system is wasted if the training is not in lock-step with the system in the aircraft. If the simulator is outdated or delayed in providing the updates in the cockpit of the aircraft, there is a lack of concurrency that must be addressed.

Col. Carpenter called on industry partners to help address these challenges. He issued a call to action because his program will rely upon them to surmount both the challenge of drastically increasing the Air Force simulator inventory and that of increasing their platforms’ capabilities. “If we’re going to prevail, it’s going to require all hands on deck,” he admonished industry partners at last December’s I/ITSEC conference. “This whole game we’re in here? It’s all about experimenting, learning, and just evolving.”

To that end, the Colonel emphasized the importance of industry pitch days, and why more of them are needed  in the acquisition process going forward. Much like at I/ITSEC, it’s here where industry players have the opportunity to get in front of military decision makers, demonstrate new solutions, and receive real time feedback.

“Let’s stretch ourselves,” Col. Carpenter continued. “Because at the end of the day…we want to give our warfighters the absolute best capability.”