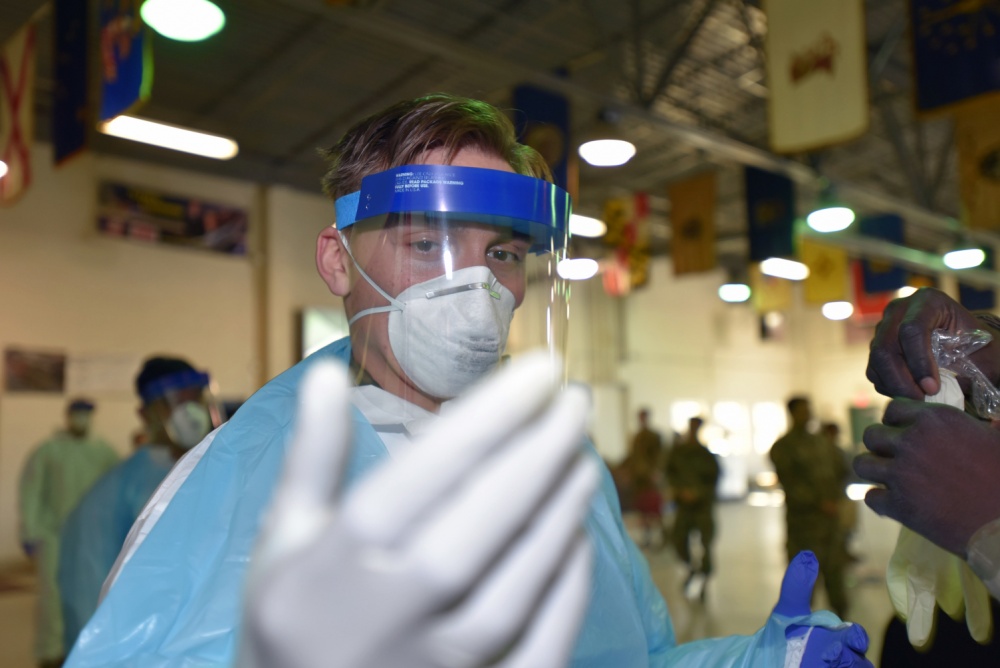 The military must now contend with the addition of COVID-19 to the list of new and challenging threats that our armed forces must surmount in order to maintain readiness at all times, and to ensure its overmatch against any adversary, no matter what conditions—even a pandemic—color the battlefield.

In order to give a sense of how the military is answering this challenge, The Modern Battlespace editorial team has compiled some of the means by which the service branches are tackling the challenges COVID-19 poses.

Acknowledging the integral role that industry partners play in helping the military answer its most pressing challenges, the Army is ensuring that it remains in close contact with its contractors to identify and mitigate the impact of COVID-19 on their ability to deliver on the terms of their contracts.

Underlining that point, Assistant Secretary of the Army for Acquisition, Logistics and Technology, Dr. Bruce D. Jette commented that “our mission of delivering materiel capabilities to the warfighter is accomplished by the total force, including military, civilian and Defense Industrial Base partners.”

Air Force Taking Steps to Protect Its Most Important Missions

Last Wednesday, Air Force Chief of Staff Gen. Dave Goldfein ordered the leaders of the Air Force’s major commands to “reset” and insulate its most essential missions from the COVID-19 pandemic.

Especially when operating from areas of the world that have seen widespread infection, like Italy and Germany, measures need to be taken so that air wings based there and across the globe can still perform the absolutely essential combat and intelligence gathering operations, even if it means diverting personnel from other mission areas.

“Aviano Air Force Base [in] Italy has not stopped flying airplanes,” Gen. Goldfein commented. “They need parts, they need fuel, they need things to keep those airplanes going.”

As the Army’s Training and Doctrine Command showed last week, continuing to prepare for the fight need not stop, even under social distancing directives.

Last week, while observing social distancing, Fort Jackson, where roughly 50 percent of all soldiers begin their training, continued to conduct their Initial Military Training (IMT) so that, pandemic or not, the Army has the personnel it needs to carry out its mission.

Last week, Army Lt. Gen. Ron Place, Director of the Defense Health Agency, wrote an op-ed in Military Times showing how the military health system is not only capable of dealing with the pandemic, but in some ways, “uniquely suited to the crisis.”

Part and parcel to that contention is the fact that the military can not only call on the medical professionals currently in uniform. It has called upon retired soldiers with medical training and added their skills and experience to the Army’s health arsenal, in addition to reviewing what Guard forces should also be called up as well.

Once a #Solder always a #Soldier. Feel like dusting off your old uniform? The #Army is looking for retired medical Soldiers. #VictoryStartsHere @PaulFunk2 @TradocDCG @CmdTradoc https://t.co/eZXw6gr6vI

“Just as every Marine is a rifleman, every medical provider in our system is a generalist,” LTG Place wrote. “Agility is part of what we offer our nation every day.”

USAMRIID Turns its Focus to COVID-19

Since the first COVID-19 death in the U.S. in February, the Army’s premier virus research lab has been on the case, doing its part to get samples of the virus out to other labs working on understanding the disease and synthesizing a vaccine and designing tests and metrics to determine if prospective treatments are effective.

This story highlights again the military’s ability to apply its extant capabilities to new and mold-breaking threats with aplomb. According to WIRED Magazine, “If any science lab should be poised to tackle the current outbreak, it’s the U.S. Army Institute for Infectious Diseases,” as “its scientists have been handling the world’s most dangerous organisms since the late 1960s.”

Making use of their manufacturing capacity and technical expertise, defense industry partners have also stepped up efforts to combat the spread of the pandemic.

Speaking at the White House last week, Greg Hayes, the CEO of Raytheon Technologies, committed his company to “stand ready to help in any way we can,” including taking steps to protecting U.S. Air Force crews from infection while transporting evacuees from areas where the disease is widespread.

Hayes also announced the donation of over a million articles of personal protective equipment and that the company would repurpose existing capabilities to produce approximately 10,000 face shields over the next four weeks.

Said Hayes, “You don’t need the Defense Production Act to tell us to act.”