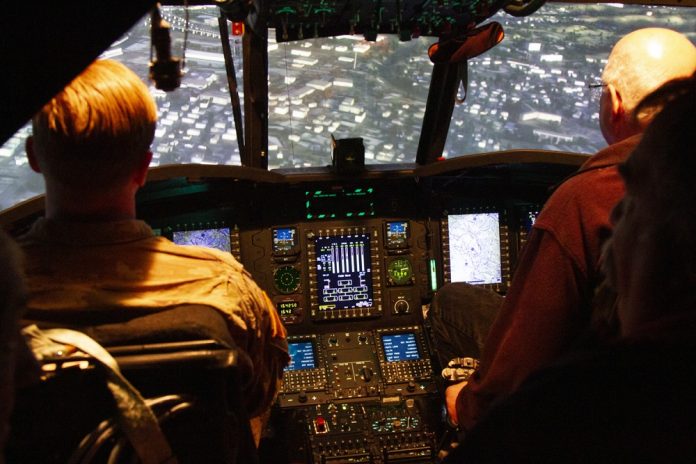 As the military implements doctrine like JADC2 and moves faster towards multidomain operations, the speed of military technological development also accelerates. Consequently, it becomes a more important, if not a more challenging, task to ensure simulator concurrency to match new hard- and software changes to the platforms they are preparing trainees to use on the connected battlefield.

“Operational capabilities are going to be implemented a lot faster in the future than they are today, it is crucial that …training devices need to keep pace with and accurately model those increasingly sophisticated real world platforms,” Nick Scarnato, Director of Strategic Marketing, Integrated Solutions for Collins Aerospace, commented in a recent interview with us[.

To ensure that they do that, Scarnato pinpoints three distinct traditional factors—operational concurrency, physical concurrency, and latency. Together, they represent the “table stakes” for guaranteeing simulator effectiveness and ensuring that trainees are accurately learning the systems they need to and that they are doing so in a way that prepares them for next generation multidomain operations.

To understand why Scarnato flags these three points, read on below:

Modern Military Training (MMT) Editors: What factors do you think most contribute to simulator effectiveness?

Nick Scarnato: There are actually three key factors that need to be considered in any training solution, whether it’s in Live, Virtual or Constructive (LVC) training domains or an integrated LVC environment.

And all of them have to do with concurrency, which is best described as having a match between the actual real-world solution or application—be it an airborne platform, a ground vehicle, or an operator console—and the training solution.

Within concurrency, there are the operational and the physical aspects.

The operational aspect of concurrency is about making sure that the physical controls within the training device respond in the same way as they do on the real world platform. In simple terms, when a pilot flips a switch on his or her console and a certain light goes on as a result, the way that works should be exactly the same as if the pilot were to go through the same motions on the actual platform.

Then there’s the physical aspect of concurrency, which is that everything that the student touches is not only spatially accurate and consistent with the way it is in the actual real-world platform, but that it has the same tactile feel. If it’s a spring-loaded switch, then the analog in the training device is going to have the same amount of spring-loaded pressure.

MMT Editors: Why are these two considerations so important?

Scarnato: The reason that these operational and physical concurrency issues are important, and why these aspects of the training device and the real world need to be in lockstep with each other is simple. If a pilot or operator is learning on a training device that is not concurrent with the real world platform, the mismatched muscle memory and knowledge they have built up could become negative training, detracting from simulator effectiveness and the trainee’s effectiveness in the real world.

MMT Editors: What about the third factor that you brought up before? What is it and why is it also an important factor in building simulation devices?

Scarnato: Yes, latency, which describes the amount of time between when, say, an individual flips a switch and gets a return indication from his or her instruments. In the context of a training device, the amount of time it takes for that to happen in that simulated environment also needs to match exactly what that would be in the real world.

Many people take these three factors—operational concurrency, physical concurrency, and latency—for granted, but they are absolutely table stakes when you’re developing a simulation device.

Latency in particular is poised to become increasingly important to simulator effectiveness. As the military puts more emphasis on training for multidomain operations, having a zero-delta latency is going to be increasingly important, so whatever happens in your simulation device and your aircraft is operationally happening at the same speed in both cases.

Many people take these three factors—operational concurrency, physical concurrency, and latency—for granted, but they are absolutely table stakes when you’re developing a simulation device.

And notably, because things are going to be happening a lot faster in the future than they are today, it is crucial that we maintain our focus on ensuring zero-delta concurrency and latency because the training devices need to keep pace with and accurately model those increasingly sophisticated real world platforms.