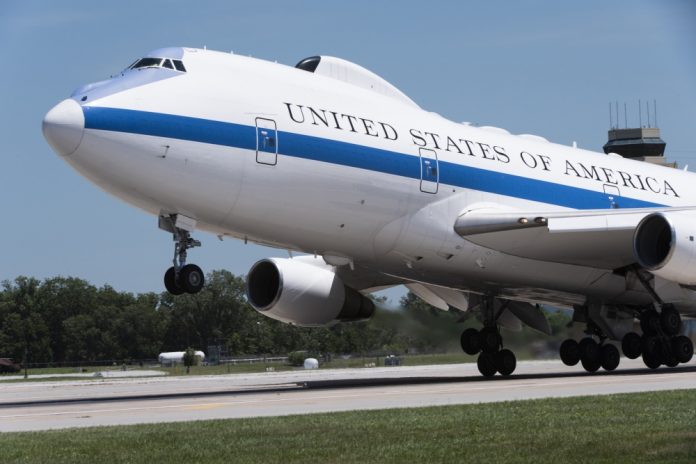 In February, the U.S. Air Force announced that it would spend $76.4 million next year to replace a vital link in the U.S. nuclear arsenal.  It was not a missile, or a warhead, or even a bomber.  But rather, the Air Force E-4B—one of the “Doomsday” planes.

Perhaps one of the few military platforms that, according to National Interest, “will be considered a success if it never has to execute its primary mission,” the E-4B’s—along with a similar Navy platform, the E-6B’s—primary function is to maintain communications between the National Command Authority (generally the President and Secretary of Defense) and our arsenal of land- and sea-based ballistic missiles even if the United States has been hit by a nuclear first strike.

So, even in this gravest of scenarios, the E-4B and E-6B fleet have a vital role to play in ensuring mission readiness, even if the unthinkable were to happen.

The eventual replacements for these aircraft may fall under the purview of the NEAT Assessment of Alternatives (AoA), which is an amalgamation of the three programs it’s trying to replace with one platform: the E-4B, Air Force’s National Airborne Operations Center (NAOC); Executive Airlift, replacing the Vice President’s plane; and the E-6B, the Navy’s Airborne National Command Post and “Take Charge and Move Out” platform (ABNCP/TACAMO).

And to be sure, the E-4B/E-6B replacement is set to inherit a tremendous responsibility as the battlefield becomes a denser, multi-domain environment.

Because of its role as the ultimate airborne command and control platform, and requiring it to communicate both with submarines deep underwater and ground-based ICBMs, the modernization of military networks across domains could be a critical consideration in this process.

As military platforms of all types consistently transmit more data than ever before, the operators who would be asked to manage our nation’s deadliest weapons under the direst of circumstances need to have the tools they need to make sense of incoming C2 data and to act upon it.

“More so than any other modern military platform,” Alicia Datzman, Manager for Strategic Marketing, Integrated Solutions, at Collins Aerospace told us, “the next-generation NAOC and TACAMO aircraft need to be ready to connect and stay connected in a multi-domain fight.”