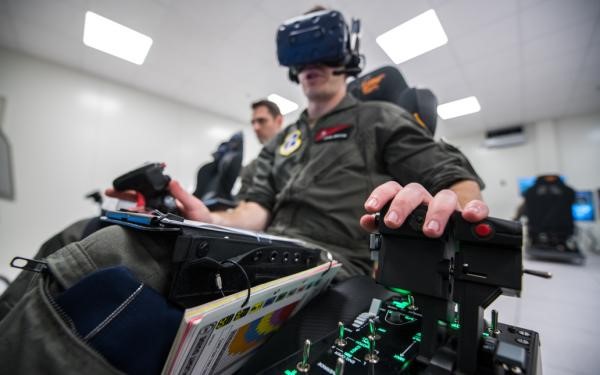 Each month, our editorial team features a person in the military industry that demonstrates the importance of simulation training for military readiness. From Air Force pilots that have relied on hundreds of thousands of hours of training that have saved their lives in emergency ejection situations, to a few of the first women B1 and B2 bomber pilots, to the Army’s Future Command Synthetic Training Environment leader, we have heard many perspectives about the future of simulation training and how it is evolving.

This month, we are showcasing the perspective of Ret. U.S. Air Force Colonel, Dan Marticello, who is now the President and CEO of CymSTAR. Before heading to the private sector, Marticello had a long career in the military. He eventually was responsible for the procurement and sustainment of the USAF aircrew and maintenance simulators before becoming Program Manager for the Presidential Aircraft Recapitalization, where he was responsible for the design and procurement of the next Air Force One.  Since his retirement, Marticello is now looking at the technology impacting military simulation and training from the industry perspective.

“Interaction with the training industry started from when I first joined the U.S. Air Force in 1988 and started to learn the basics of being an Air Force officer,” Marticello reflected. “As my career progressed, I went on to flight test and learned of the tremendous advantages that modeling and simulation provides in that realm, giving us the opportunity to test things in a simulator before attempting it in a real-world environment.” Soon, Marticello transitioned to acquisition and was responsible for the procurement of these very systems.

As he looked at how the industry has evolved over the years, Marticello has seen the technologies advancing. “As the computing power in the commercial sector has improved, military training technologies have taken advantage of that evolution,” he told us. “Image and visual generators today, including the integration of AR/VR/MR have greatly improved fidelity, and it’s amazing to see the acceleration over the last 10 years.”

As the industry evolves, Marticello points to two areas where he sees the most advancement and growth. The first is a move to a common architecture model. Marticello compares this Air Force initiative to the cell phone industry, where applications from multiple sources run on common platforms such as Apple iOS or Android. Similarly, in the training industry, Marticello sees the emphasis being placed on the applications, leveraging common platforms. “The common architecture in training would allow for better cybersecurity, sustainability, control and configuration of the system, and maintenance,” he explained. The applications that lay on top of the system then “allow for a tremendous amount of diversity and flexibility in the types of trainings provided, and what type of data is collected, to better tailor it to the user and their specific needs.”

The second area that Marticello points to is the move to AR/VR/MR capabilities. “It allows you to provide a 360, high-definition environment, without having the encumbrances that we had in the past to get the same effect.”

The military training industry used to be “the tip of the spear” when adopting new technology for use according to Marticello. “Now, we can follow on the coat tails of the commercial industry with everything they are doing in the virtual reality realm, along with artificial intelligence and other emerging technologies.” While the commercial industry is using these applications in other sectors, Marticello believes the military training industry is now applying these innovations to meet every increasing warfighter requirements for training realism in the virtual world.

Watch Dan Marticello explain where he see’s the future of training heading in this short video clip.