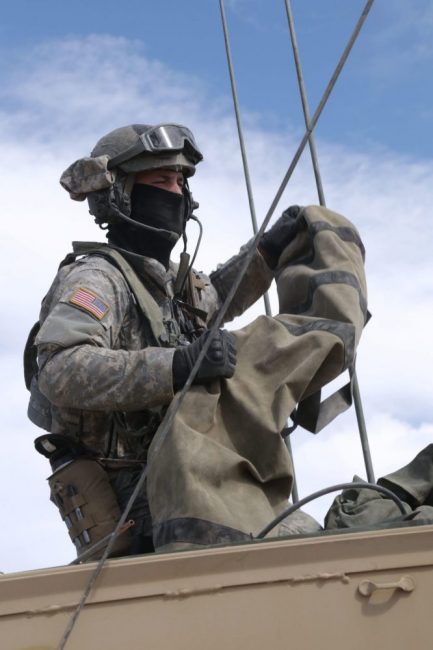 {Editor’s Note: This article is contributed by Dr. Brett Walkenhorst, Director of R&D and Business Development at Silvus Technologies. Dr. Walkenhorst discusses how commercial waveforms and technologies and the development of Low Probability of Intercept/Low Probability of Detection (LPI/LPD) waveforms and anti-jam capabilities are being integrated into the field. Read Dr. Walkenhort’s article below.}

Though invisible to the eye, the airwaves above today’s battlefields are often as congested as the terrain below. The U.S. military gains a great strategic advantage by harnessing the electromagnetic spectrum for communications, but transmissions from commercial and military RF systems sap our precious bandwidth.

Not only is the spectrum congested, but it is also contested. Adversaries constantly vie to thwart or corrupt our communications, whether by denying us access to the spectrum via electronic attack or passively detecting and geolocating our systems. Whether the spectrum is congested or contested, however, the consequences are the same: the lives of U.S. forces are at risk, and key tactical or strategic information may be compromised.

But recent developments in advanced radio networking give our soldiers greater access to secure, robust, and covert communications in future conflicts.

DARPA planted the seeds of mobile ad-hoc networking (MANET) radios in the 1970s, while other companies and research subsequently helped make the technology feasible. This is how battle-ready MANET systems like the one offered by Silvus Technologies became available to the U.S. military. It provided a robust, multi-antenna, software-defined radio platform that hosted an OFDM-based waveform called Mobile Networked MIMO (MN-MIMO). MIMO processing dramatically improves throughput, reliability, and range.

MIMO processing has helped spawn a battery of critical new or improved radio features: anti-jam (AJ), low probability of intercept (LPI) and low probability of detection (LPD). These functions ensure that radios cut through the noise of congested and contested environments while also remaining covert. Developments in these technologies will power enormous advances on the battlefield over the next few years.

With their MIMO arrays, radios like the StreamCaster are able to eliminate interference by directing a null toward a jammer. This happens via an optional software module called MANET-Interference Cancellation (MAN-IC). MAN-IC listens to the spatial signature of a jamming signal, then computes a set of antenna weights that null out that spatial signature. This method has proven extremely powerful, yielding as much as 30 dB of consistent suppression in field trials. The module also has the secondary benefit of improving LPI/LPD performance. By utilizing a friendly cover signal, radios can operate on the same frequencies by nulling the friendly “jamming” signal. The friendly signal overpowers the much weaker communications signals of those radios, hiding these weaker signals from the enemy.

Another module called MANET-Interference Avoidance (MAN-IA) enables military radios to avoid interference by hopping to a different frequency band. The system monitors multiple frequencies in different bands using the MIMO degrees of freedom available in the radios. Once the radios detect a jamming signal, each radio autonomously selects the next best channel. A regrouping algorithm ensures that all radios converge on a common frequency in less than one second.

In a MANET, radios typically operate at maximum power to ensure high throughput and high network efficiency. But this produces suboptimal LPI/LPD performance since higher power is more easily detectable by adversaries. This has led to the development of a module called MANET-Power Control (MAN-PC) that minimizes the radio’s transmit power while maintaining the desired throughput. Field tests have shown a 70 percent reduction in distance to the detector before the signal is detected.

Working under the U.S. Army’s Protected Communication for Manned-Unmanned Teams (PCM), Silvus has recently developed a new physical layer waveform. Although the details of this waveform are confidential, field tests have shown that it significantly improves LPI/LPD performance.

Each of the modules described here offers advantages in the AJ/LPI/LPD space. Until now, they have largely operated in isolation. Now the capabilities will be able to work together. Since the technologies share some objectives, their operation must be adjusted so they do not conflict with one another. The adjustments also ensure the radios select the best mode, or combination of modes, for the best possible operation. To that end, next in the works is a machine learning algorithm to control the selection and operation of the various modes while optimizing throughput, reliability, and LPI/LPD operation in various hostile environments.

As much as advanced weaponry and well-considered strategy, our military depends on clear, unimpeded, and reliable radio communications. The expectations and warfighter needs outlined above are shaping the future of radio communications in the modern battlespace. Machine learning combined with advanced signal processing will enable the kind of robust, covert communications that keep us ahead of those trying to do us harm.