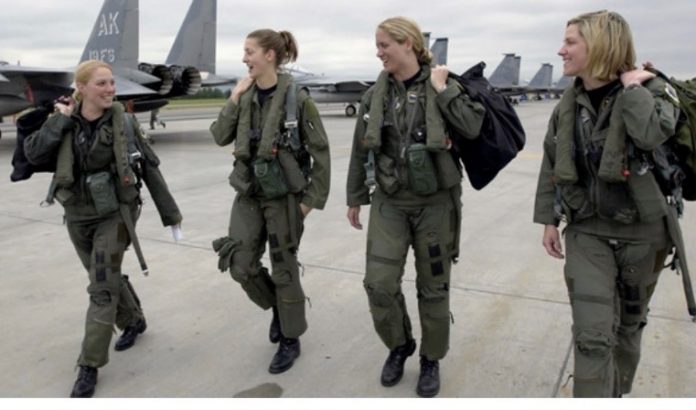 During Women’s History Month, we dive into the importance of diversity and women in military aviation from the perspective of three women who all joined the U.S. Air Force at different times. The discussion delves into their motivation for joining the military, where they see new opportunities to encourage a more diverse U.S. Air Force, and how the military is changing to address some of the obstacles along the way, including safety gear.

“Aviation is inherently inspiring and there is something special about flight,” Savanah Bray, told us. Bray is a Public Affairs Officer for the 53rd Wing in the US Air Force, focused on the operational test and tactics development for fighter and bomber aircraft. As an aerial qualified photographer, she flies in the back of the F16-D model and Strike Eagle for test photography documentation. Even in a support role, “you get to be a part of a really special community,” she told us.

It is a community that hasn’t always been accessible to women. In fact, when Samantha Weeks decided she wanted to be a fighter jet pilot at the age of 6, it simply wasn’t allowed. In fact, it wasn’t until the year she entered into the U.S. Air Force Academy that Congress overturned their decision and allowed women to fly in combat in 1993. Weeks pursued her passion and recently retired from the U.S. Air Force as a Colonel after 23 years of flying F15-C and F-16s as well as being on the USAF aerial demonstration team, Thunderbirds. She is now a Senior Manager for Business Development for Integrated Weapons Systems at Collins Aerospace.

“We are at a pivotal point in the United States, where we can really become that diverse and inclusive country in institutions and organizations at any level,” Weeks stated. “But first, we have to understand where biases exist, acknowledge them, and then learn how to grow beyond them.” Weeks added, “Without a doubt in my 23-year career, I’ve already seen growth and evolution from an individual level to an institutional level. And it’s only going to continue to evolve as we move forward in the twenty-first century.”

Alicia Datzman, who spent 12 years flying B1 Bombers for the U.S. Air Force and is currently a Strategic Marketing Manager for Integrated Solutions at Collins Aerospace, told us that part of this evolution is in creating equipment and safety features to support various body types. When she was flying, based on the charts, if she was flying at certain altitudes, she was at risk of serious injury if she needed to eject, due to her weight and size at the time.

“What we’ve done with this next-generation of the ejection seat is open up that envelope on the lower end to accommodate a larger percentage of females, as well as on the higher end to accommodate some of our larger male counterparts.” Datzman explained that representing a more diverse population will ensure that “it’s truly going to be a safer future for our flyers.”

Bray explained that she recently was one of six in the 53rd Wing to test a new modified anti-gravity suit. Originally created in 2001, the suit was created with male body sizes in mind. “The reality is that male and female body types are very different. You are not considering things like hips and waists when you are designing aircrew flight equipment for men, primarily.”

She explained that the new suite was modified and allowed for darting in the waist and adding more paneling to the side to make more room for expansion in the thighs for a rounded or hourglass body type. “The results were incredible,” Bray explained. “G-tolerance went way up. I had no idea that if a g-suit was two or four inches too big around the waist it wasn’t providing real coverage.” After providing feedback on the prototypes, the suits are being modified and manufactured for the crew.

Weeks discussed the importance of equipment that fits a diverse body type, which has been an issue she has championed since early 2000. She notes that the data used is from 1967 with a male population sample size in mind. Now, military services and industry partners are finally considering a variety of body types. Female airmen with the 377th Security Forces Group at Kirtland Air Force Base, New Mexico, are some of the first to get fitted with protective vests that have corset features to tighten, as needed, avoiding the “one size fits all” approach.

Weeks said the evolution that is taking place will continue as long as women continue to share their stories. She stressed that “telling our story from where we began to where we are now, to where we want to go in the future” is critical. “When I was on the Thunderbirds, you’d be amazed at the number of little boys, little girls, men, and women that I met across the country, to across the globe, that didn’t know women can be fighter pilots, and that still exists today.”

“We share our stories so that it will encourage others to follow us and be that next generation that grows and grows so that Savanah it isn’t the only female aircrew in her squadron when we do this ten years from now.”

To listen to the full conversation with these three women in military aviation, click here.