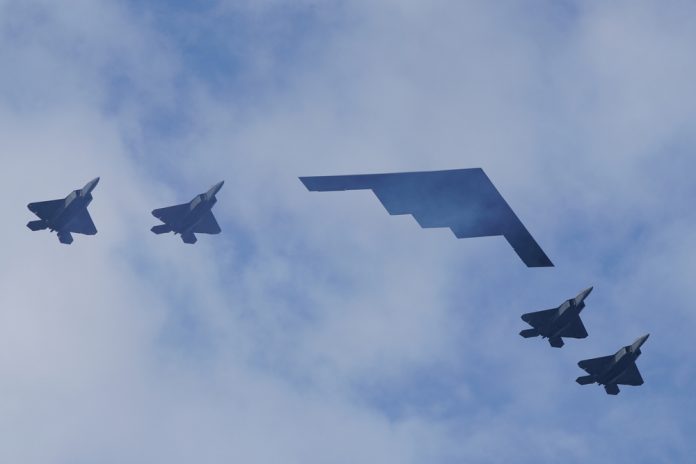 During Women’s History Month, the Modern Integrated Warfare team is highlighting women in leadership roles who are making an impact on the future of warfare and the technologies that will accelerate innovation. Colonel Beth L. Makros has her eye on the future. As the Chair, Airpower Innovation and Integration in the Department of Military and Strategic Studies at the U.S. Air Force Academy, not only is she mentoring the next generation of airmen, but she is also standing up the Institute of Future Conflict which studies future conflict and the tools to prepare future leaders to win wars.

Col. Makros has never spent a day outside of the U.S. Air Force, she told us in a recent interview. “I was born a military brat,” she explained. Her dad was in the USAF and taught and flew at the test pilot school at Edwards AFB before he retired. Being around planes all the time, Makros recalled that first time she considered her path to become a fighter pilot. Her brothers would point to the fighter jets, an F-15 or F-4, and say they wanted to fly those planes one day in the future. When she said she wanted to fly those planes too, someone on the flight line said, “No little girl, you can’t fly planes like that.” At eight years old, Makros thought that was stupid and didn’t understand what being a female had to do with flying combat planes.

“Most of my career decisions were driven by someone saying that I couldn’t do something, and I wanted to prove them wrong,” Col. Makros explained. Even after she got into the Air Force Academy, she was told she was too short to fly. But determined to prove them wrong, she literally stretched her body doing hang-ups until she hit the goal and told them that was the only time they’d be able to measure her. “Good or bad, this is who I am.”

She went on to receive her commission from the U.S. Air Force Academy as a Distinguished Graduate, become a command pilot with more than 2,000 hours, and served in many leadership roles throughout her career. Each career advancement and decision Makros made in her career was to stay true to her authentic self. She knew she wanted to have her own family, so she carved out a career path for herself that allowed her to pursue her passion of flying while creating a tight family unit with her husband, Col. Rob Makros, and her three daughters.

“We all have an idea of what our career is going to be, but that’s not always what happens,” Makros said. “I was married to another pilot and we both had to make decisions for our family, and even career sacrifices, to be stationed together. Our number one goal was our family.” Together, she and her husband went into the B-2 community so they could fly together and stay together. They are one of very few married couples to ever pilot the B-2 Spirit at Whiteman together. Despite the challenges, including being a new commander with a newborn, toddler, and kindergartner, Makros was motivated to stay true to her goals and make it work. That passion for being her authentic self is one of the things that Col. Makros stresses to those that she mentors. Having a diverse Air Force is more than just having women join and conform to the current standard, Makros explained. While conformity is needed in certain cases, it is just as important to recognize women for who they are and embrace and accommodate the differences.

“This is a conversation that we must have,” she said and by having these conversations and shining a light on the importance of understanding gender, ethnicity, culture, she is starting to see some of these small changes occur. One example is the maternity flight suits, which “shows that people are listening and that our needs mean something to leadership.”

“I wish someone had told me to be comfortable in my own space and have presence and confidence,” Makros reflected. She now advises female cadets to “hold your own and speak up. The more you speak up, the more comfortable you will be speaking up in the future and you can share your own unique perspective.”  Too often, Makros watches female cadets stay to the back of the room and shy away from speaking up. But she notes that their perspectives as females could be a game-changer when on a mission. Sharing a different perspective on the mission could shed light on a situation that a traditional male perspective would have never considered, Makros explained.

“Often, as women, we’ve been conditioned to stay quiet to make others feel better, or to adjust so that others don’t feel threatened or uncomfortable,” Makros said. “It is important to sit in discomfort sometimes. It can create change to make space for yourself – space that is rightfully yours.”

That is why Col. Makros is excited about the future. Under the leadership of USAF Chief of Staff, General Brown, she sees a shift coming. “We have to accelerate change, or we will lose,” which is a statement that applies to both the future capabilities of the fight as well as a culture shift, Makros explained. “We need to think differently and be better.”

The Air Force Academy is “focused on the future fight, learning to adapt quicker, and filtering through more information and data to create more innovative solutions for the future,” Makros told us. That innovation will require the recruitment and retention of a diverse and inclusive team of women and other minority groups and also looking at the social issues that impact them. “Those are probably the two biggest modernization areas underway, and both have to do with service culture.”