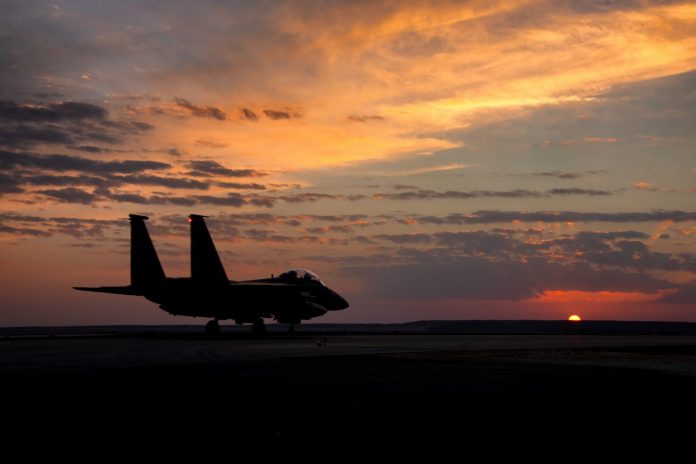 Peter “Shadow” Ford, Requirements & Capabilities Director for Raytheon Missiles & Defense, found his passion the first time he flew in an airplane. In high school, he was recruited by the U.S. Air Force Academy and his inaugural flight was on the commercial jet he took to the Academy.  Even as a passenger, Pete’s first trip above the clouds was enough for him to know he was meant to be a pilot. But he never expected one day he’d survive an F-15 ejection.

“I spent 26 years in the Air Force and spent most of my time flying,” Ford told us. “I prefer to be in an airplane upside down somewhere than in an office.” He explained after his first flight to the Air Force Academy, he was hooked. But when he had a chance to fly on his own, he felt he found his home. “If there was an airplane, I wanted to take it upside down. While some people strap into airplanes, I found myself having a more burning passion to strap the airplane ‘on’ to become a part of it. This demanding environment is where I found my real joy,” he explained.

After the Academy and pilot training, Ford went through weapons school before embarking on five combat tours and commands, with joint classified positions in the U.S. Indo-Pacific Command, a DARPA Service Chief tour, and several operational test and evaluation tours. Over his career in the Air Force, Ford spent more than 3,000 hours in fighter aircraft, testing next-generation weapons, radars, and data links, and then developing the tactics, techniques, and procedures for each.

Ford reflected on his military career and said it was filled with “exquisite memories” of supersonic flight, upside down at 50,000 feet with views of the northern lights, and decades of camaraderie with people who came together to work as a team fulfilling a mission. “When I look back on the experience years later, I really cherish the folks I served with,” Ford told us. “It’s a privilege you don’t take lightly to have these brothers and sisters in arms working together. The friendships built under fire still are with me.”

During his time in the Air Force, Ford was used to speed and danger. Yet, one of his most challenging moments was when he faced an ejection seat scenario. “The first thing I’d tell you is that it is always better to walk away from an airplane than to run away from one that is on fire after you jumped out of it,” Ford joked.

Ford was doing the operational testing of the F-22, which was the next generation air fighter, to see if it could be a replacement to meet the Air Force’s air-to-air needs. “We basically flew our F-15Cs against the F-22s to break in the airplane and understand better how it turns and integrates, testing its ability to accelerate and decelerate,” Ford recalled. Flying the F-15, he was fighting an F-22 in a one-on-one, on the defensive in a basic fighter maneuvers mission. “The F-22 was behind me, and my job was to try to avoid being shot, so I was doing advanced handling characteristics and high-G turns, afterburner and max power rapid roll reversing turns, to beat the weapons he had,” he explained. It’s not uncommon to pull 9 Gs and aggressively maneuver in close quarters.

As Ford maneuvered the F-15 into a rapid reversal, it went out of control and rotated upside down at 180 degrees. “All of the sudden, I wasn’t a voting member and it’s never good when you are the only person in an airplane and you don’t have a vote,” he recalled. He tried anti-spin controls, but the F-15 went into a vertical spin and then a flat spin, which is difficult to recover from. “The world started to come up to join me, and I saw that there wasn’t much room below me anymore. I elected to save my life and reached for the ejection handle.” Ford landed a couple of hundred feet from the F-15 when it crashed and burst into flames.

Ford reflected on the importance of training and how it kicked in. It became intuitive to eject. “It goes back to our dedication to excellence and training. We bring every bit of our best selves to the mission every day,” he said. “The training just kicks in and it becomes intuitive. I was ready to employ the skills that I learned. My hands, eyes, feet, and legs automatically went to the right place to make the ejection happen safely.”

After retiring from the Air Force, Ford continued to follow his passion for delivering excellence to warfighters. “There is only so much time you can spend upside down supersonic in an airplane,” he said. Ford often tells his protégés they must find the same passion and dedication they had when serving our nation, then apply it to their next mission or stage in life. He took his own advice when he realized, working in the defense industry, he could find the same performance metrics, precision, and excellence he found in the military. He realized after flying nearly every fighter jet product made by Raytheon, he could now work with the company to get the most advanced technologies into the hands of the warfighter as quickly as possible.

Today, Ford is grateful that Collins Aerospace is now a part of the Raytheon team. The ACES II™ ejection seat that saved him was manufactured by Collins Aerospace. The energetics expertise critical to the ejection sequence is also critical to the success of a variety of emerging weapons programs Pete works on now.  Most recently, the company introduced the ACES 5 ®, a more advanced ejection seat to meet updated aircraft airworthiness requirements and significantly raise the safety threshold, designed to save more lives.