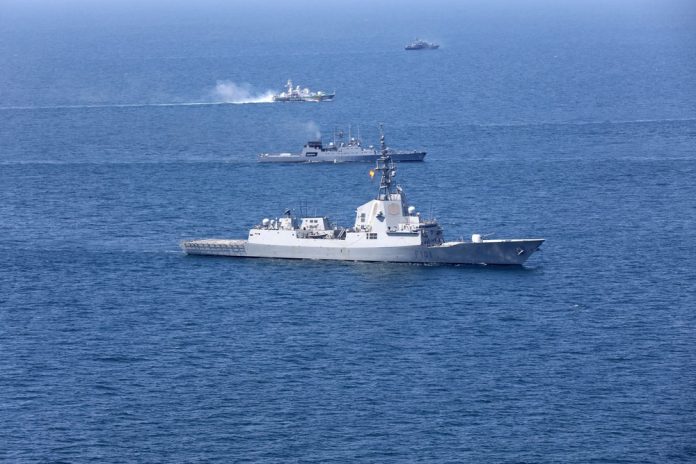 It is a well-known principle of power projection that an effective navy is a core requirement for any great power. Throughout history, every major player on the world stage has fielded a navy capable of projecting power and achieving their mission all around the globe. In today’s increasingly connected battlespace, this principle of international maritime missions remains as important now as it has ever been and requires industry cooperation and collaboration.

Rapidly advancing adversaries, coupled with increasingly contested battlespaces, have created a tense global climate where the ability to quickly assess and mobilize in the face of a threat is paramount. During a recent Sea Air Space 2021 panel “International Partnerships: How Global Industries Meet the Global Needs of Our Sea Services,” experts shared insights on how emerging technologies can help the U.S. and its global partners prepare for and dominate in the future fight.

Each member of the panel brought with them their own unique experience about the role that international maritime plays in projecting power and protecting the peace, and each presented what the international defense industry can do to meet their current needs. One of the common themes among all of them is transformation at pace.

“In a world where the U.K. faces threats from research in developing powers and both state and non-state actors, there is an undeniable requirement to transform at pace,” Hine said. “For years the Royal Navy was one of the leaders in maintaining operation and technological advantages, however, this was only possible thanks to constantly challenging daily norms, utilizing emerging technology, and striving to out-think our adversaries.”

The panelists agreed that keeping pace will require international cooperation between global navies and industry partners. Particularly at the cusp of the fourth industrial revolution where automation, artificial intelligence, advanced robotics, and data exploitation will be at the core of mission success, collaboration, and innovation.

“To remain ahead of our adversaries, we must see more cooperation, more sharing of the R&D burden, that can help us ensure that we are getting the highest return for every pound spent,” Hine commented. He believes that industry is at the level it needs to be to successfully integrate and share data, it just requires the willingness from all parties to make it a reality. “We can do this alone and achieve some success, but we can do this so much more constructively in partnership, together we operate more efficiently, together we are stronger.”

Foggo echoed Hine’s thoughts on cooperation. Foggo has seen the benefits of international and industry cooperation during his long career in the U.S. Navy, and as the threat landscape continues to evolve, he believes international cooperation between the U.S. and its allies is more of a necessity now than ever before.

As the threat landscape becomes more connected, Foggo concluded that while virtual presence is important, it doesn’t equate to physical presence. “We need to be out there to project power,” and the military needs the tools from industry to do it better than anyone else.

According to Hardwick, the defense and aerospace industry is ready to meet the challenges of today in the way that most benefits the U.S. and other allied global navies. “The future of partnerships will be built and not sold. That means that our partners and allies around the world will demand more co-development and more cooperation from the U.S. government and industry in order to advance global shared security.”

Hardwick noted that several of the countries on stage represented three out of the top five export destinations for the U.S. “We as an industry have a global supply chain,” Hardwick stated, “but in order to have true partnership around the world, industrial interoperability is critical.” Hardwick noted that recent interoperability initiatives from the U.S. and her allies have already gone a long way towards proving or demonstrating the ability for nations to work together.

Concluding the international maritime missions panel, Schöback emphasized the need for mutual collaboration to truly benefit not just the individual global navies but all those who are allied in the pursuit of similar goals. “We have a common overarching interest in providing a strong defense for all,” Schöback remarked. “We are all fighting for democracy and freedom, and we can find considerable gains through internationalization of defense with our allies and partners.”

To watch this panel and others from Sea Air Space 2021, click here.