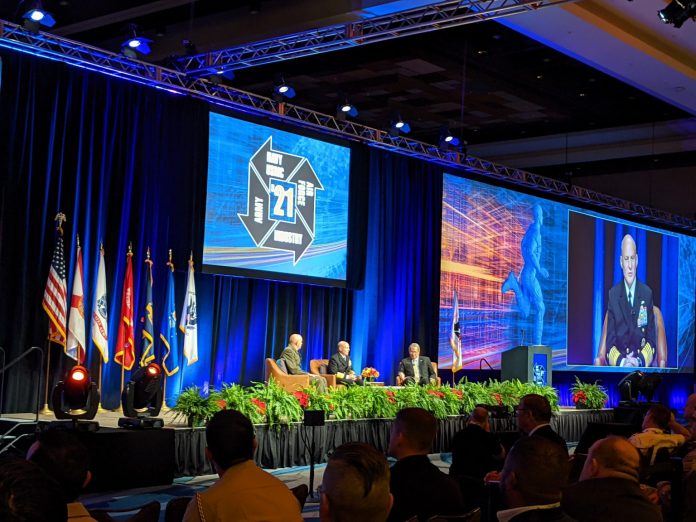 Military leadership dug deeper into the I/ITSEC 2021 theme of “Innovating and Accelerating Training: Adapting to an Unexpected Future” during the show’s Opening Ceremonies on November 30. These leaders emphasized the importance of training solutions that match modern battle tactics. In the opening discussion, we heard from General David H. Berger, Commandant of the U.S. Marine Corps and Admiral Michael M. Gilday, Chief of Naval Operations, with Rear Admiral James A. Robb, U.S. Navy (Ret.) and NTSA President, moderating the discussion. The three of them unpacked existing challenges around training mentalities and what steps forward look like as we approach a new era of training realism and fidelity.

After recently conducting a few different types of practices and testing, Gilday shared a few important takeaways that he urges military leadership to incorporate into their future training strategies. With a strong focus on relevancy and realism, Gilday explained how to work towards a more proficient military.

Berger built on Gilday’s sentiments, offering his own thoughts on the shifting attitudes that will drive innovation in future training approaches. Berger emphasized a new sense of urgency that comes with this changing battle landscape and increasingly sophisticated adversaries, noting that we are no longer our own main competition.

You can listen to the full conversation and other important discussions from the show on the NTSA YouTube channel here. For regular updates from the I/ITSEC 2021 show floor, follow Modern Integrated Warfare on Twitter and LinkedIn.