Collaboration and joint efforts are trademark characteristics of the U.S. military. Defense leaders today are particularly focused on increasing interoperability and connectedness across domains and branches to ensure overmatch. These are a few of the themes to be explored at the upcoming Air Force Association (AFA) Warfare Symposium, taking place March 2-4, 2022, in Orlando, FL. With the theme of “Air and Space Power: indispensable to Deter, Fight & Win,” the significance of cross-branch collaboration will be a centerpiece for the show. To learn more about what to expect at this year’s AFA Warfare Symposium, we spoke with Lt Gen Bruce “Orville” Wright, USAF (Ret.), President of the AFA.

The Modern Battlespace (TMB) Editors: Tell me a bit about this year’s theme, “Air and Space Power: Indispensable to Deter, Fight & Win.” How will that be unpacked at this year’s event? 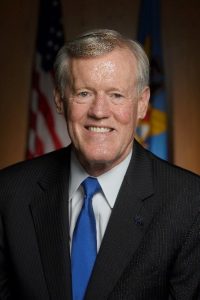 The message here is that you can’t fight in any domain without capable Air and Space Forces. You need the Air Force to get you there, to provide intelligence, surveillance, and reconnaissance, and to deliver bombs on target, if necessary. And you need the Space Force for precise navigation and timing, for ISR, and for communications. If you go to war without those capabilities, you’re going to lose. That’s what makes Air and Space Power Indispensable to Deter, Fight and Win.

TMB Editors: What speakers are you most looking forward to during this year’s event?

Wright: There’s going to be so much happening that it’s hard to know where to start. We’ve never had so many speaker sessions at the AFA Warfare Symposium before. But let me mention just a few. Of course, we’ll have Air Force Secretary Frank Kendall to kick the event off. He’s brought great vision to the Air Force and we’re looking forward to that.

Then we’re going to have something truly unique: the Chiefs of two services on stage together talking about the inextricable links between air and space, and how the unique capabilities of two services come together in one powerful Department of the Air Force.

We’ll also have special guest Eric Schmidt, the former CEO of Google and the co-chair of the National Commission on Artificial Intelligence. This is a guy who helped democratize the power of artificial intelligence and has now focused his attention on how to leverage that capability for national defense, and I expect he’s going to spark a whole lot of ideas among the Airmen, Guardians, and industry professionals joining us in Orlando.

TMB Editors: What are the most pressing challenges in defense right now as we look to truly realize joint warfare on a global scale?

Wright: Right now, our military has the best people, the best training, and some of the best equipment in the world. Did you notice what I said? Some of the best equipment. The fact is our adversaries are catching up to us and may have surpassed us in some areas. If that surprises and concerns you, it should. The United States hasn’t had to face peer adversaries in 40 years. So, we have to up our game, and I think that’s exactly what Secretary Kendall and the two chiefs – General C.Q. Brown of the Air Force and General Jay Raymond of the Space Force are focused on.

This is what General Brown was talking about when he said we have to “Accelerate Change” because if we don’t, we face the chance that in a peer fight, we lose. So, what does that mean? It means modernizing our systems so we regain the decision advantage over our adversaries; it means making them more resilient so that we can operate through kinetic, cyber, and electronic warfare attacks; and it means nurturing our relationship with allies, because that’s one area where America retains the strategic advantage over all our rivals: we have more friends than they do. And for good reason.

Wright: Joint All Domain Command and Control (JADC2) is revolutionary technology that promises to crank up the speed of a proven U.S. advantage. The United States pretty much invented jointness, the idea of the Air Force, Army, Navy, Marine Corps, and now Space Force all operating together. JADC2 takes jointness to a whole new level. Through advanced computing, networking, and digital communications links, it’s going to give us the ability to make the battlefield overwhelmingly complex for our foes while empowering our pilots and other operators with artificial intelligence and other advantages to accelerate decision cycles and win fights almost before they begin. The idea here is to dominate the electromagnetic spectrum so that at the same time we put it to work for us it’s being denied to our adversaries.

TMB Editors: What do you think will be some of the key takeaways/buzzwords resulting from this year’s AFA Warfare Symposium?

The takeaways should be that we’ve got to ramp up investment and modernization now. That modernization is really across the board. We need Block IV F-35s, we need F-15EX with EPAWS, we need B-21 bombers, we need to replace our half-century-old Minuteman III missiles. We need to bring our nuclear communications, command and control (NC3) systems into the 21st century. We need a resilient space architecture that will ensure America can fight through any kind of attack. These things aren’t “nice to have’s” or insurance policies. They are necessities on which our future depends.

TMB Editors: Anything else you’d like to add for folks attending this year’s show?

Wright: We’ve worked incredibly hard to make this an outstanding event, even in the face of a pandemic. We’re working hand-in-hand with the Department of the Air Force to ensure the safety of all who attend and to ensure access to all. We’re putting mitigations in place to minimize the risk of spreading illness and to maximize convenience. Every session will be recorded so no one needs to miss a thing. I really think it’s going to be the best AFA Warfare Symposium yet!