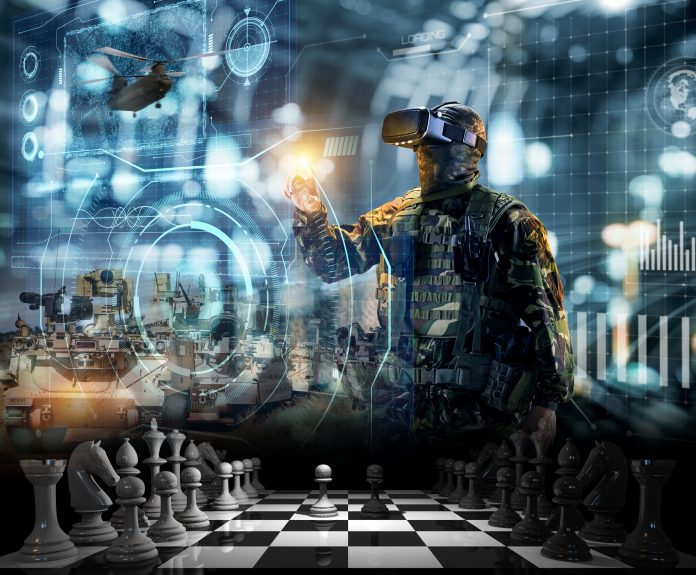 As the battlespace continues to evolve to include leading technologies that contribute to the readiness and lethality of the warfighter, the impact of artificial intelligence (AI) often finds its way into the conversation. AI in defense offers immense advantages to the warfighter and opens doors to building on existing initiatives like Joint All Domain Command and Control (JADC2) and open systems architectures (OSA).

However, as with the adoption of any new technology, AI brings with it its own challenges to a shifting defense dynamic. Matt Tarascio, senior vice president for AI focused on DoD at Booz Allen Hamilton, spoke with The Modern Battlespace editorial team about this new dynamic and the challenges that defense leaders should be prepared for.

“Right now, we’re faced with multiple challenges, but to me, it all comes down to enabling elements of adoptions for AI in defense,” explained Tarascio. “Those elements can be boiled down to securing the funding, having the right talent at our disposal, and optimizing the way we handle data.”

The many facets of defense data and its management brings to light several areas for potential growth as well as important lessons learned as more data-driven systems and platforms find their way in-theater.

“As an industry, we’ve shifted from big data to quality data, and I think that’s been a fundamental shift across the entire AI landscape,” Tarascio stated. “It’s no longer about feeding more and more data into the algorithm, but about feeding accurate and reliable data into it to teach it what you need it to learn.”

This challenge extends to the concept of multi-domain operations as well. Not only is quality data required, but it also needs to be “multi-platform, time-synchronized data” as Tarascio put it. “That is what allows an algorithm to learn and potentially gain insights that a human can’t see in the data, and then deploy it and generalize from it.” An example would be working in different geographical environments – applying an algorithm that was made up largely of Arctic region data in a tropical region would not translate well and wouldn’t account for environment-specific obstacles like palm trees or sand. The data sets would be too different and could impact the decision-making ability for a warfighter.

Harnessing Data at the Edge

Processing data at the edge is also a large challenge. “In commercial environments, we can generally rely on the cloud being available,” Tarascio explained. “In fact, it’s a huge deal when it becomes unavailable, even for a short amount of time. But in a contested battlespace environment, you can’t rely on access to the cloud. You have to have enough computing at the edge to deploy algorithms successfully and be able to make decisions.”

This need brings with it its own set of SWaP [size, weight, and power] challenges, adding another layer of restraints to the equipment. It’s a top concern that the industry is tackling as warfighters become more and more reliant on immediate data accessibility in any environment.

Building Trust Between Human and Machine

Perhaps the biggest challenge with the adoption of AI in defense is trust, and Tarascio thinks that warfighters need to learn it, just like they learn their other skills used in-theater. “It’s a huge challenge in human-machine teaming. We have to do more to enhance that trust among humans, and training is a large component of that.”

To Tarascio, it’s understandable why that trust is not so easy to come by, given the incredible nuance that comes with certain situations warfighters face. “People like pilots, who have undergone a significant amount of training, are not going to inherently trust a machine over their own judgement. ” Mitigating biases and clarifying the ethics around AI and how to deploy algorithms that aren’t biased continues to be a priority for industry as AI becomes more woven into a defense strategy.

“I think as we embed more AI into some of our platforms and systems, the training must reflect that transition and incorporate the element of building trust between human and machine,” Tarascio said.

Despite the challenges laid out here, the positive impact of AI on the world of defense, and the warfighter as an individual, are undeniable. With humble beginnings as a tool to help alleviate mundane, manual tasks, AI now offers great promise as a predictive tool.

“As we move into the future, I think we can look at any kind of situation where a human is overloaded, and AI has a place. You can enhance their decision-making capability or performance in-theater like in flying a complicated jet or utilizing a complex platform. I think those are all strong applications for AI to make a significant impact.”

The sheer speed with which AI can process data already greatly supports efforts in a multi-domain battlespace, an increasingly complex and expanding arena for defense. With data coming from more sources than ever, sorting it and identifying that quality data is imperative to the decision-making process. “Machines can make decisions at a nanosecond scale,” Tarascio explained. “To put that in perspective, one nanosecond to one second is the equivalent of one second to 32.7 years. With non-kinetic warfare becoming a more dominant aspect of warfare in general, that speed is crucial.”

Tarascio is excited to see where AI will continue to grow and evolve in defense strategy, concluding that “AI is an absolutely fundamental piece of the puzzle moving forward.”