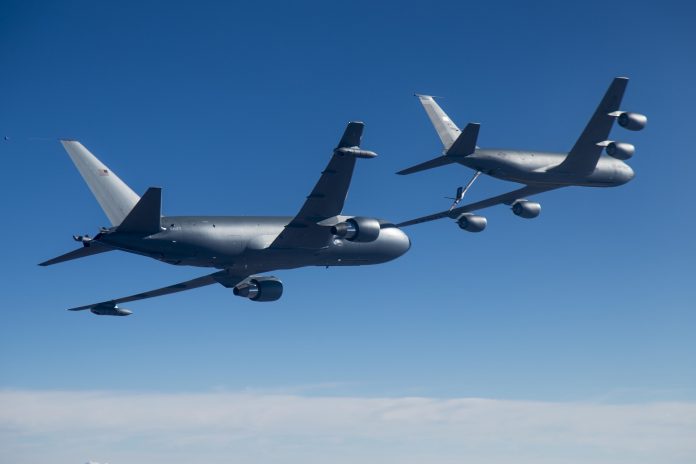 The future battlespace requires joint capabilities and interoperability between all domains – land, sea, air, space, and cyber. Yet no battle can be won without air power, which was a key theme at the recent AFA Warfighter Symposium. To strengthen this power – and deliver on intelligence, surveillance, navigation timing, as well as communications across domains – modernization of the aircraft networking infrastructure is critical, and the heart of that modernization is faster networking with greater throughput.

In a recent interview with Marc Ayala, Senior Director for Customer Capabilities and Requirements for Military Avionics at Collins Aerospace, he explained how the future competition against near-peer adversaries, and what will be required to win. According to Ayala, a key element is the acceleration of aircraft networking infrastructure modernization.

“When you talk about projecting power across a very large distance, like the Pacific theater among others, the current aircraft infrastructure is inadequate. Aircraft need to be updated to allow for data from increasingly sophisticated aircraft avionics, sensors, satellites, weapons and more to move across nodes unimpeded to support joint all domain command and control (JADC2),” Ayala said.

From modernizing avionics platforms to integrating emerging technologies and capabilities, fleets need to quickly transform and ensure data can seamlessly and securely travel across the network from the cockpit to the ground, and across all domains. This is where the ability to transition data faster becomes incredibly important. Creating a network that is designed to allow for rapid mission systems evolution that doesn’t require, or at least minimizes, time-consuming and costly air vehicle airworthiness requalification, or other certification efforts, will be one of the most important avenues for modernization.

As the data flows to the various nodes from multiple directions across the domains, today’s aircraft networks do not have the capabilities required to manage the data flow and derive the needed intelligence. “We need to move beyond old network systems that we’ve had in previous decades and move to newer commercial-based technologies like time-sensitive networking (TSN) and Multicore Processing.” Ayala explained that one area of focus is the ability to move very large amounts of data – up to ten gigabytes per second – faster with the necessary bandwidth and processor throughput to avoid bottlenecks that could alter real-time decision-making.

“We often are thinking about what goes into the cockpit that can help the pilot interact with the aircraft and be a more effective node in the decision-making lop,” Ayala shared. For 6th generation fighters, this includes the development of a new lightweight, helmet-mounted display (HMD). Ayala noted that he sees a future where an HMD can augment a pilot’s situational awareness and eventually reduce or outright replace much head-down cockpit displays. HMDs can help pilots make faster decisions by delivering both day and night vision, navigation, targeting, and safety data from various sensors for advanced situational awareness.

Ayala pointed out that for existing fleets, modernization means something different than it does for 6th Gen aircraft, yet it is just as important. For example, the KC-135 is an aircraft that has been upgraded dramatically over the past 50+ years and its evolutions continue to make it a key part of any conversation about air power and the Advanced Battle Management System (ABMS). “In the 1990s the KC-135 moved from analog to multi-function displays (MFD) with LCD technology, and a flight management system (FMS), but we can’t stop there. To compete with peer adversaries the JADC2 network of the future requires upgraded open systems mission processing with the increased data throughput required to take full advantage of the tanker’s constant presence in the battlespace.”

Similarly, the KC-46 platform for advanced air refueling has been building in advanced capabilities as part of its ongoing modernization efforts. This includes ABMS-related efforts, which would turn the tanker into a “hot spot” for connectivity and an upgraded Remote Vision System (RVS) that offers a generational leap in visual acuity for a panoramic view of the area through sensors and cameras.

Whether it’s the next generation fighter or the latest advanced tanker, the speed of transformation for air power is critical for the future fight. To keep up with the pace of threats, an open systems approach will be required to innovate faster.

“Open systems are going to be critical in the next decade as we look to upgrade and integrate new capabilities at a pace that matters,” Ayala told us. “At the rate that industry produces and integrates new technologies today, by the time it gets to the field in the hands of warfighters, it is no longer relevant.”

Ayala explained that an open systems approach to the modernization of infrastructure is an important way to integrate capabilities faster-moving away from months and sometimes years to days and hours. He stressed the importance of the government requiring its suppliers to meet the standards of the open system so the industry can align R&D roadmaps and reduce the rework that often hampers time to field.

“I’m happy to see the services taking a leadership role in this regard,” he said. Although he indicated that having closer collaboration with the industry on the standards will be important as the services move forward.

In the meantime, Collins Aerospace is continuing to invest in capabilities for the future. One key project is the development of a digital backbone for military services. “We are taking a leap of faith that the DoD will adopt next generation networking and we continue to invest in this area,” Ayala said. Part of that leap is an ongoing project between Collins and several other companies to reuse prior and ongoing government investments to enable a set of capabilities needed for an FVL aircraft using a variety of open standards.

“We are developing next generation networking switches and multicore processing to keep up with the sheer volume of data that will need to travel across the battlespace,” Ayala added. “We are supporting these initiatives because we believe in them. We see multi-domain operations as an important step in helping our warfighters be as prepared as they can be to go out, face any adversary, and feel confident that they can win any fight with the appropriate air power. That’s the goal, and it’s one that we at Collins will strive to achieve.”