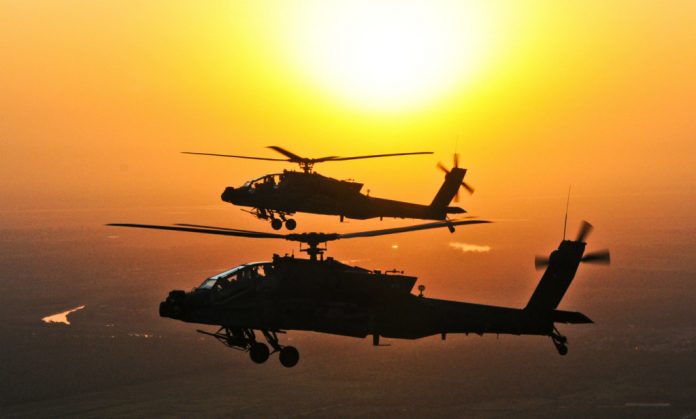 Early in April of this year, the senior leaders and decision-makers responsible for aviation and aircraft for the U.S. Army came together with defense and aerospace industry partners for the annual Army Aviation Association of America Conference – which is also called AAAA or “Quad A.” This conference is one of the preeminent Army Aviation events of the year, getting private industry and military partners together to discuss the Army’s major aviation initiatives and requirements for the coming years.

I was in attendance at this year’s conference, which was an incredible opportunity to not only hear about some of the current Army Aviation initiatives – including the next-generation Future Vertical Lift (FVL) aircraft – but to also interact and collaborate with other industry partners working to build the platforms and weapons systems that will define the future of aviation for the military.

Since Quad A is an Army Aviation conference and exposition, it makes sense that most of the topics of discussion revolved around the major modernization initiatives and new systems that the Army is looking to acquire in the next five to ten years. This meant a good deal of the discussion revolved around FVL, which is one of the top priorities for the Army today, as well as other major initiatives.

MOSA is not new to the military – or to Army Aviation. However, this year’s Quad A was particularly exciting for many of us industry partners because of the progress that the Army has made through the Modular Open System Approach Transformation Office (MOSA TO)

But, one overarching theme that emerged that is – by its very nature – applicable across all ongoing Army Aviation initiatives and programs is Modular Open Systems Approach (MOSA).

Ultimately, the U.S. Army and other Services across the broader U.S. Department of Defense (DoD) have made it very clear that they can no longer afford to pay for individual and unique integration efforts for similar hardware installations. MOSA provides the framework to increase reuse, lower integration costs, and increase the speed of upgrades for capability upgrades on both the enduring and future fleets.

This would not only generate cost savings for the military moving forward, but more importantly provide weapon system overmatch by adding functionality and capability to the fleet more quickly.

MOSA is not new to the military – or to Army Aviation. However, this year’s Quad A was particularly exciting for many of us industry partners because of the progress that the Army has made through the MOSA Transformation Office (MOSA TO), the emerging of an Army owned enterprise architecture, and the progress we’ve made in Collins moving open systems and open architectures forward in cooperation with several industry partners.

Demos show adding new capabilities is both possible and safe
During Quad A, the Collins Aerospace team integrated currently fielded capability alongside the latest innovations from nine other industry partners, including General Atomics, Elbit, Tektonux, BAE, and others for the latest in a series of open systems demonstrations. This was yet another demonstration of a large-scale integration.

This demonstration at Quad A illustrated our ability to separate the flight critical systems needed to fly an aircraft from the mission capabilities. From there, utilizing open and widely adopted standards, we were able to demonstrate the ability to give those flight critical systems priority access to the processing, networks, and aircraft sensor data and safely render that information to the cockpit displays.

This separation and prioritization ensures flight critical systems continue to safely operate while supporting the rapid integration of mission capabilities. This includes introducing the types of modularity the Army is keen to acquire in the near future, such as 3U cards, containerized software, and FACE applications.

But we didn’t stop there. We also demonstrated something much more focused with actual use cases for the battlefield that incorporate both FVL aircraft, Air Launched Effects (ALE), Gray Eagle Extended Range (GE-ER), and Long Range Precision Fires (LRPF).

While the desire to implement open systems has been around for many years, Quad A was another successful step in showing the power of MOSA and the implementation of standards that will speed the journey towards their adoption.

Bringing it all together
The demonstration at Quad A showcased Collins’ safety critical processing, deterministic networking, and cockpit display systems that comprise the flight deck and enable the integration of mission capabilities from the other industry partners that are utilized in battle during operations.

In this particular demonstration, we were able to integrate Elbit’s helmet mounted display (HMD) into a common computing architecture. Having a common architecture for an HMD enabled us to pull in next generation concepts and functionality, and have important information from a number of disparate systems displayed in a logical way for the pilot by also implementing an associated FAF software component definition.  For example, if an air launched effect (ALE) detected a threat, a threat dome would pop up and display that threat on both the large area display (LAD) and the HMD using a single grid location sent to that FAF defined interface.

These are all capabilities and systems that exist today, or are being built to emerging requirements. We demonstrated the ability to reconcile existing and siloed Army architectures and get them to work together seamlessly. We effectively demonstrated that these disparate building blocks from different military industry partners and programs can be assembled into systems that can benefit Army Aviation and its warfighters. And it’s all possible today.

While the desire to implement open systems has been around for many years, Quad A was another successful step in showing the power of MOSA and the implementation of standards that will speed the journey towards their adoption. The demonstrations performed, and the presence of the MOSA Transformation Office, reinforced the importance of establishing key interfaces and widely accepted standards for open systems for the military marketplace moving forward.

Quad A was an incredible example of what the future can and will look like when it comes to open systems.

The military’s industry partners heard the call for more open systems and open architectures, and they’ve answered by innovating, collaborating, and introducing exciting new systems that will usher in a new age in military aviation. The demonstrations and discussions at Quad A are another stepping stone that will deliver new capabilities and systems to future pilots and operators that will give them the edge in the fight – even against the most advanced near-peer adversaries.

To learn more about open systems in the DoD, click HERE to download a complimentary copy of the Whitepaper, “Defining an Open Systems Approach for the Defense Community.”