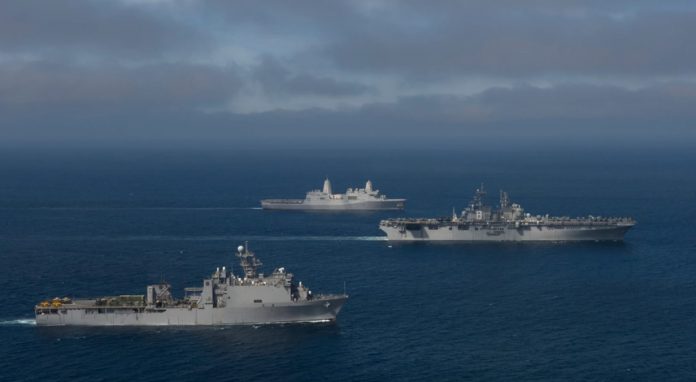 In early April, the National Harbor played host to Sea Air Space 2022, the Navy League’s premier event focused on the future of military power. This year’s conference focused on the Department of Defense (DoD) and the broader defense industry’s efforts to bring warfighter capability into the next generation at a time when our adversaries are increasingly advanced and capable. And while there was too much exciting news from the event to cover in a single article, some key moments stood out.

The Modern Battlespace scoured the event for the top-line messaging moments that reveal some of the major changes, innovations, and technologies that are now at the forefront of military efforts to win the future fight. Here are a few selected moments for those who may have missed them.

Strategy should drive Navy budget says Navy Secretary Carlos Del Toro
At the Sea Air Space 2022 Luncheon Keynote address, attendees were treated to insights from Carlos Del Toro, Secretary of the Navy, who took to the stage to discuss how to best support military operations. “[Our budgets] should be driven by strategy and not the strategy being driven by budget itself,” Del Toro told the gathered attendees. “That is why we have put together a clear strategy to deliver the lethal, resilient, sustainable, survivable, and responsive course called for in the 2022 National Defense Strategy.”

Del Toro continued by adding that there are many factors that people who participate in the budget conversation must remain aware of as the US looks towards an increasingly contested world. “In order to maintain our maritime dominance, we have to be serious about building and maintaining the right capabilities to win tomorrow’s wars,” Del Toro said. He added that he supports Admiral Michael Gilday’s vision for distributed maritime operations and welcomes support from the Navy’s private sector partners in making it a reality.

Open systems approach remains a top priority for Navy and Collins Aerospace
As has been the case for the past several years, open systems were a central point of many conversations at Sea Air Space. To help realize the Open Systems Approach (OSA) concept, Collins Aerospace was joined by other industry partners in embracing open systems in its recently awarded contract and programs. Heather Robertson, Vice President and General Manager of Integrated Solutions at Collins Aerospace noted that many of them, including the Very Low-Frequency (VLF) Communication system for E-XX award, which Collins recently won, underscore, “the accelerated need for command, control, and communication capabilities that our DoD partners rely on.”

E-XX is a new test program designed to leverage the open systems approach to create an easy-to-integrate solution that can bring together weapons systems and platforms. On top of integrations, Collins is also looking to boost its maintainability to allow for weapon systems to be upgraded rather than replaced, extending the life of aircraft, and providing a potential long-term solution for the Navy. “This award underscores the recognized technical expertise that Collins brings to the Take Charge and Move Out (TACAMO) community,” Robertson added.

Supply chain issues remain but are nothing new for DoD
While many industries were lamenting COVID-19 disruptions to their supply chains, a panelist during the Supply Chain Risk Roundtable noted that this was not anything new to the defense industry.

Chris Espenshade, Director of Small Business for Naval Supply Systems Command, told the attendees that the defense industry has always overcome issues with the supply chain but that among the many issues facing them are a severe lack of depth and competition among suppliers, which hampers both cost and quality. “For example, today, 90 percent of our missiles come from only three sources,” Espenshade added.

The DoD and the White House have worked to overcome this and other challenges facing the supply chain, including Executive Order 14017 which the DoD is using to build a deeper understanding of the nation’s defense supply chains and its industrial base capabilities.

However, according to Kurt Wendelken, Vice Commander for NAVSUP, two key issues remain. “There are a limited number of suppliers, and we are fighting obsolescence on a daily basis,” Wendelken said. “Both of these need to inform how we [in the Navy and our defense industry partners] think about procurement and if cost is the right solution. All panelists agreed that suppliers must understand and work to create solutions that help underscore the “One Navy” concept.

Navy Safety Command urges readiness while preventing loss of life and material damage.
One of the earliest meetings at Sea Air Space covered the Navy’s new Naval Safety Command, which is designed to increase warfighter survivability and safety by reducing preventable mishaps. “Everything we do is to save lives of Sailors and Marines,” said Rear Admiral F.R. “Lucky” Luchtman. “That’s what keeps us motivated.”

With a few notable incidents in recent years, many in Navy leadership saw the existing safety management system as “inconsistently effective” according to Luchtman. This new command will report directly to the chief of naval operations.

Admiral Michael Gilday added that this new command will play a larger role in testing. “[We are] going to take a look at our commands, our units, our squadrons, our submarines, our ships’ ability not only to comply with safety instructions but… the real magic is going to be their ability to take a deeper look at our commands’ ability to self-assess and self-correct,” Gilday said. How this new safety mechanism will impact testing done in coordination with defense partners remains to be seen, but the panel noted that safety will remain a top priority for any future test.

To learn more about Sea Air Space 2022 and the future of the US Navy, click here.