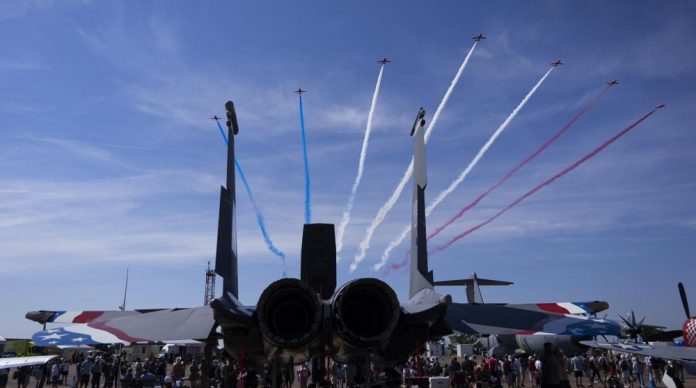 Airshows are traditionally considered good fun. They’re an opportunity for experienced pilots from militaries across the globe to show off their skills, demonstrate their aviation prowess, and display the incredible new technologies that are being incorporated into modern aircraft. It’s also often an opportunity for the public to touch, feel, and witness the future of military and commercial aviation. And that’s how the Farnborough International Airshow and Royal International Air Tattoo (RIAT) have been for decades.

Started in the shadow of World War 2 in the late 1940s, Farnborough is one of the world’s largest and most prestigious airshows. Considered second in size to only the Paris Airshow, Farnborough is one of the largest gatherings of aviation and aerospace companies demonstrating the latest in military and commercial aircraft and aviation technologies. RIAT has a shorter history, but is equally prestigious, with a reputation for gathering together the best military aviators capable of bringing out the absolute best from their aircraft.

But while the promise of an airshow has often been the amazing displays of airmanship, these are also serious events. Both Farnborough and RIAT have a business side to them. The leaders of the aviation and aerospace industries leverage this event to come together, discuss the future of the industry, and demonstrate their products and solutions to senior decision-makers in the military and commercial airlines.

This is especially true at RIAT, where military leaders from practically every NATO and coalition nation’s air force come together with industry experts and leaders to discuss their needs and requirements. It’s at these events – Farnborough and RIAT – where military leaders share their requirements and requests with their industry partners. That intelligence and demand signal will then be used by industry partners in the design and development of aircraft and aviation systems for the future force.

This makes events like Farnborough and RIAT a mix of business and pleasure – fun and work. And that has been true for the decades that these events have been in existence. But something was a bit different this past July when I had the opportunity to join the Collins Aerospace contingent at these historic UK-based airshows.

World events ramp up the importance
With incredible demonstrations of aerial excellence and even Tom Cruise in attendance, the trademark fun was present at both RIAT and Farnborough this year. But the business side of the shows felt more urgent and more serious than in years past. And it’s easy to understand why. There is an active war being waged in Eastern Europe, directly on the doorsteps of many of the nations that were in attendance at these events.

While conversations at RIAT and Farnborough always involve what the military needs and wants in future aircraft and aviation systems, those conversations were more serious and much more imperative at this year’s shows. And the demand signals that were sent weren’t for some prospective technology that needs to be developed for the future fleet. Instead, conversations focused on current systems that these nations need today to help them defend themselves should this war escalate and expand beyond the border of Ukraine and come knocking on their doors.

While we’re always excited for an opportunity to listen to senior military decision-makers from coalition countries and incorporate their feedback into our product roadmaps, it was our current technologies that were getting the most attention at RIAT and Farnborough. More specifically, it was our ISR solutions and systems that were the centerpiece of many serious discussions with military leaders.

ISR is making a difference in Ukraine
The Ukrainian military is fighting against a force that conventional wisdom from earlier times would tell us they couldn’t contend with. But they remain defiant against their adversaries – inflicting heavy losses and winning fights that many would have thought impossible against a larger, seemingly better-equipped force.

One of the keys to Ukraine’s opposition and defense has been intelligence, surveillance, and reconnaissance (ISR) solutions. And NATO and other coalition nations in that region are noticing just how much of a difference ISR is making in this particular conflict. It truly has been game-changing.

Having situational awareness and a complete picture of the battlefield is not as simple as it used to be. Facing a new generation of near-peer adversaries, today’s militaries can no longer rely on the air superiority that would enable them to fly drone recon missions over the battlefield.

Today’s more advanced adversaries can deny the airspace near their position to traditional unmanned aerial vehicles (UAVs), which makes gathering intelligence from fast-moving jets at high altitudes even more essential. Today’s militaries also need a full view of the battlefield to assist in their decision-making, not just a small section of it. This makes sensors capable of capturing wide areas essential to getting a full operational picture of the battlefield and making accurate, data-driven decisions.

How important is this full operational picture and understanding of the battlefield? In Ukraine, it’s making all of the difference.

Utilizing ISR data, defense forces are capable of strategically deploying resources when and where they’re most needed. They are also capable of leveraging ISR data and information to more accurately and strategically place effectives. And this has been one area where Ukraine has excelled in its war effort – strategically attacking weapons depots and other mission-critical facilities that can hamper the adversary’s advance and effectiveness.

This is why recent advancements in multispectral and modern radar imaging in ISR sensors are so important for modern militaries. These new sensors, including the Collins Aerospace MS-110, and TacSAR are capable of being deployed on fast-moving jets and can provide wide area, long-range imagery coverage during the day or night-time and in all weathers. These new ISR sensor solutions offer higher resolution, a larger view of the battlefield, and the ability to see through obscurants, ensuring that every ISR mission is completed successfully and results in actionable data and insights.

The ongoing war in Ukraine has shown us just how important situational awareness and a complete picture of the battlefield are for the defense of a nation. And our conversations at RIAT and Farnborough International Airshow made it apparent just how much current events are weighing on the NATO and coalition partner nations that are in that region.

A complete picture of the battlefield – assembled with multi-spectrum imagery from sensors like the MS-110, satellite imagery, and other ISR sensors – is game-changing for a nation looking to defend its borders. But how do they make all of these sensors work together, and get the most out of their ISR investment? In my next post on The Modern Battlespace, I’ll explore new imagery processing toolsets and technologies that are making it possible for militaries to get the most actionable insight from the ISR data that they’re generating.